Are You A Savvy Saver?

How does your savings (as a percentage of your income) compare with other Australians?
How do you compare to the rest of the world?

The Global Finance Magazine released an article earlier this year aggregating household savings rates across the world for 2015.

Household savings is “the difference between a household’s disposable income (wages, income of the self-employed and net property income) and its consumption (expenditures on goods and services). 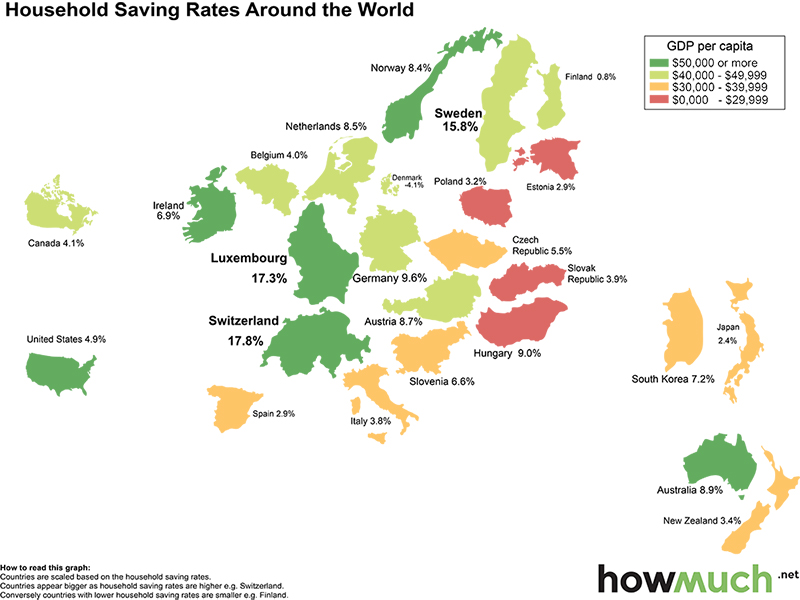 HowMuch.net built a map to provide a visualization of the household savings rates around the world by comparing 25 different countries.

The map size of the country is scaled based on the household savings rate.

Countries are also coloured by their respective GDP per capita on a purchasing power parity (PPP) basis as provided by the Central Intelligence Agency’s World Factbook estimates.

Using the PPP exchange as defined by the International Monetary Fund (“the rate at which the currency of one country would have to be converted into that of another country to buy the same amount of goods and services in each country”) allows us to compare countries with different currencies.

Can you guess which countries saved the most and least?

Countries with the Highest Savings Rates

Countries with the Highest GDP Per Capita

Countries with the Lowest Savings Rates

Countries with the Lowest GDP Per Capita

Higher GDP per capita does not mean a higher savings rate!

The data shows that having a higher GDP per capita does not necessarily mean a country will have a higher savings rate.

For instance, Hungary ($26,000 GDP per capita) has a higher savings rate than Norway, Australia, United States, and Ireland, all of which have more than double the GDP per capita of Hungary.

Denmark, which has a GDP per capita of $45,800 even has a negative savings rate of -4.06%! As seen by the map and data, savings rates differ widely across continents.

How do you as an individual compare to your country’s savings rate?

Are you saving more than the average citizen?

"Affordable" Investment Properties May Not Be The Best Idea

There’s a common perception that buying an affordable property is the way to go for property investors. The belief is that there will always be demand for this type of property, particularly by young families.

Loan Structuring - How to Save Tax

Clever loan structuring is often overlooked and can save investors tens of thousands of dollars. Let’s take a look at some of the options which might suit your situation:

The Power of Compound Interest

Do you know the power of compound interest in its entirety?

Why can’t I save for a home deposit? Six home truths

Where there’s a will there’s a way! If you have a good job and dream of climbing the property ladder...

Your Credit Score - Find it & Improve It

The average Australian has $4,300 owing on their credit card.