Goodbye "McMansions" - Our Dwellings Are Shrinking

According to The Australian the days of the McMansion are numbered, with the size of Australian homes shrinking over the past few years.

Aussie homes (some of the biggest in the world) reached peak size in 2009 at an average of 222 sqm for newly built houses and apartments combined.

But the global financial crisis put paid to that with soaring costs and changing lifestyles also to blame.

And as you can see from the graphic below the average house size varies considerably from state to state, with Perth still ranking quite high. 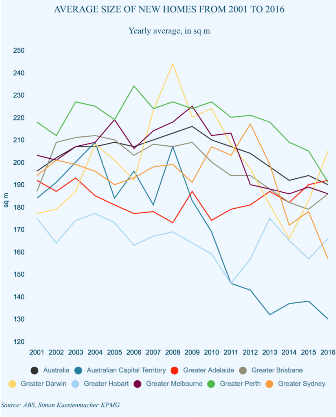 Demographic changes, especially among Gen Y, has put Australia on a trajectory towards smaller homes with a shift in values to ‘less is more’ and spending on experiences rather than material goods.

However, Australian houses are still big on a global scale with a new house, on average, having more cars and more TVs than it does children. 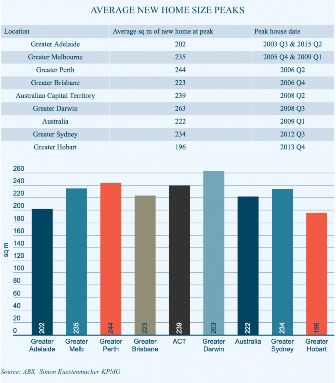 Choosing the right agent to sell your home

Whether you are selling your family home or an investment property, finding and choosing an agent is a big decision. To ensure that you appoint the best agent to sell your property it is important to do your research before making a final decision.

Avoid the most common pitfalls that home sellers make when it comes to downsizing by following our tips below.

Honey I Shrunk the Blocks!

Across Australia block sizes are shrinking and land prices are rising,..