Why interest rates will remain steady...

Why interest rates will remain steady

It has been more than two years since the Reserve Bank made a change to the cash rate and many experts are predicting it may be a long time yet before another change is made.

There is even more uncertainty amongst the ranks whether that move will be a raise or lowering of the cash rate.

One thing is clear though, that rate is going nowhere in the short term!

Let’s take a look at three of the most important economic factors the Reserve Bank influences with its control of interest rates;

By moving the cash rate, the Reserve Bank is effectively controlling the supply of money.

While there are many bank interchanges that play out at this time, in simple terms;

A rise in the cash rate forces us to increase expenditure on our mortgages, reducing our borrowing capacity and leaving us with less to spend on other things.

A fall in the cash rate leaves us spending less on our mortgage and increases our borrowing capacity and disposable income.

With property prices in all major cities under control now and booms a thing of the past for the short term, there is no need to touch the cash rate right now,

Inflation is also a very important factor to be considered by the Reserve Bank.

For those that are unaware, they openly target an inflation band of between two and three per cent.

As you can see below, our economy has sat under that line for the last three years as it slowly creeps upwards toward that band. 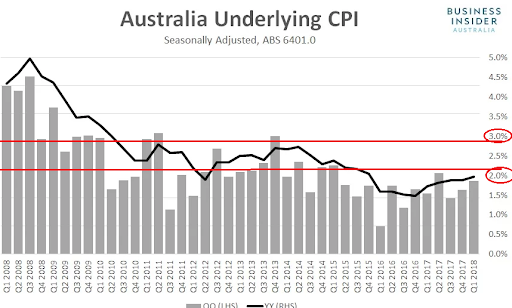 While not with that band currently, the Reserve Bank will be comfortable enough that they have inflation under control and it is slowly heading in the right direction.

As mentioned previously, a rise could reduce the money supply, sending inflation crashing, while a cut could lead to an increase in spending and a rise in inflation.

Once again, they will sit and wait this one out — no need for a change.

Something you may not have considered is how a change in the cash rate affects our Exchange Rate.

While there may not be a specific or fixed target as such, it does play a key factor in our Economy and will impact on both imports and exports.

A rise in the cash rate will strengthen our dollar and a rise will usually follow as a result, but this may lead to a decrease in exports as our goods or more expensive for overseas buyers as they get less for their money.

It may also mean less people are keen to travel to Australia and this can be a blow to our economy as revenue from tourism and exports will decline.

For the average Australian this may be seen as a benefit as we get more value on products we import and overseas holidays become more appealing with the strong dollar.

In contrast, a fall in the cash rate would see a fall in the AUD and be a benefit for exporters and the tourism industry as Australia becomes “cheaper” with more value.

This may be negative for the average Australian though as overseas holidays become more expensive, as do products that we import.

Right now, with the Australian Dollar sitting around 75 cents against the US Dollar, there is no urgent need to influence it one way or the other.

Again – the Reserve Bank will be in wait and see mode.

While there are many things that the Reserve Bank can achieve and effect with a change in the cash rate the three main factors they juggle are house prices, inflation and the exchange rate.

These are the main things that will impact our economy in one way or another.

At this point in time all three appear to be under control with very little needed to be changed in the short term, one way or the other.

The credit squeeze has assisted the Reserve Bank with controlling house prices without impacting parts of Australia where the economy is a lot weaker.

Inflation is also under control, although a little subdued and the RBA will be comfortable it is heading in the right direction.

Finally, there is no need either to address our exchange rate as it is neither too high or too low.

So, while at some point in time there will need to be further in-depth analysis by the experts, the same result can be achieved (at this point in time) by merely applying some common sense and understanding a few key points.

Our Economy is under control at the moment, so until something changes, interest rates are going nowhere!

"Affordable" Investment Properties May Not Be The Best Idea

There’s a common perception that buying an affordable property is the way to go for property investors. The belief is that there will always be demand for this type of property, particularly by young families.

Family Trusts - How Do They Work?

The number and use of family trusts around Australia for investment purposes has grown significantly over the past decades...